CareLink is thrilled to announce a special fundraising performance by The Capitol Steps at Swarthmore College’s Lang Performing Arts Center on Wednesday, March 11, 2020! 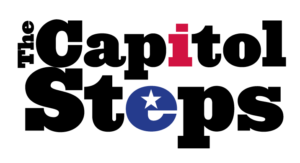 The Capitol Steps have been a Washington, DC institution for over 30 years, providing a unique blend of musical and political comedy. Each show features tasteful lampooning guaranteed to leave both sides of the political spectrum laughing. If you’ve ever wanted to see Barack Obama belt out a show tune, Nancy Pelosi rip through a rock song, or New Jersey Governor Chris Christie perform classical ballet, this might just be the show for you! The comedy troupe, which began as a group of Senate staffers in 1981, have recorded more than 35 albums, including their latest, The Lyin’ Kings. They’ve been featured on NBC, CBS, ABC, and PBS, and can be heard twice a year on National Public Radio stations nationwide during Politics Takes a Holiday radio specials.

Admission is $60; proceeds benefit CareLink’s many worthwhile programs. Tickets are available online at https://cbo.io/carelink60/CapitolSteps or by calling 610-874-1119, ext. 613.Proceeds from this fundraiser support CareLink’s many worthwhile programs, including the employment and educational activities of Career Services. Details about underwriting opportunities for this special event and advance ticket purchase are available online at https://cbo.io/carelink60/CapitolSteps.